Today I'm wearing my new "book review" hat for the very first time.   Let's see how well it fits.  I hope my loyal followers won't mind this deviation from my normal card posts from time to time.  Perhaps, I'll even include a card reflecting some aspect of the book.
Now that's a novel idea.

The Captain Takes a Wife The Captain Chronicles, 1875 by Doris Durbin was such a delightful read, I am sorry I'm finished.

As the book begins Harry Richardson, The Captain, has just received his theology degree from Mercer College and is about to embark on a new chapter in his life, as a circuit preacher in the mountains of northern Georgia.  The Captain really has no immediate thoughts of marrying, although his Aunt had told him that in his new position as a country minister a wife would certainly be an asset.  And then, before boarding the train, Harry comes across a young lady who enlists his aid.  Not only is she in trouble, but she's also in a wedding dress, trying to escape an unwanted arranged marriage.
Seeing Harry with Sarah at the train station, his friends reach the conclusion that there is an elopement in the works.  They decide to buy tickets and surprise The Captain with a proper wedding aboard the train.  Also on the train are a young reporter and photographer, ambitiously following what looks to be an interesting story, Reverend Peterson, one of Harry's college professors, and his wife on their way to Atlanta,  several deputies searching for Sarah, as well as a man who looks like a hired gunman.   Why is the man Sarah was supposed to marry going to such lengths to find her?  Poor Sarah has no clue in what she has unwittingly become involved.  But, as promised, Harry does his best to protect her from whatever danger is following her.  A very eventful train ride ensues, with several twists and turns along the way, as this very enjoyable story unfolds.

This book has wonderfully developed, very likeable characters.  Although occasionally it seemed a bit predictable, there was ample plot movement and various surprises to keep the reader turning the pages.   Once finished, the first thing I did was check to see if there was a sequel available.   And there is!

Disclosure of Material Connection: I received this book free from the publisher through the BookLook Bloggers <http://booklookbloggers.com> book review bloggers program. I was not required to write a positive review. The opinions I have expressed are my own. I am disclosing this in accordance with the Federal Trade Commission’s 16 CFR, Part 255 <http://www.access.gpo.gov/nara/cfr/waisidx_03/16cfr255_03.html> : “Guides Concerning the Use of Endorsements and Testimonials in Advertising.” 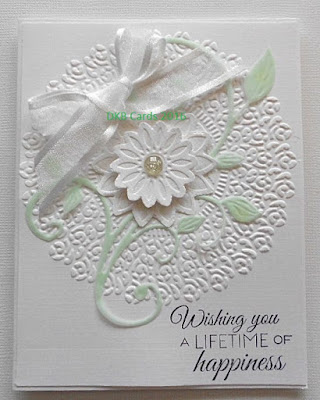 For this card I used a velum flourish die cut,  a Verve stamp, and
a doily embossing folder from which the center flower was fussycut in 2 layers and popped, sheer white ribbon bow, and glitter gem. 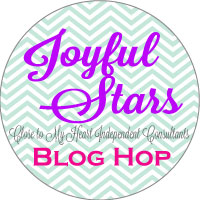